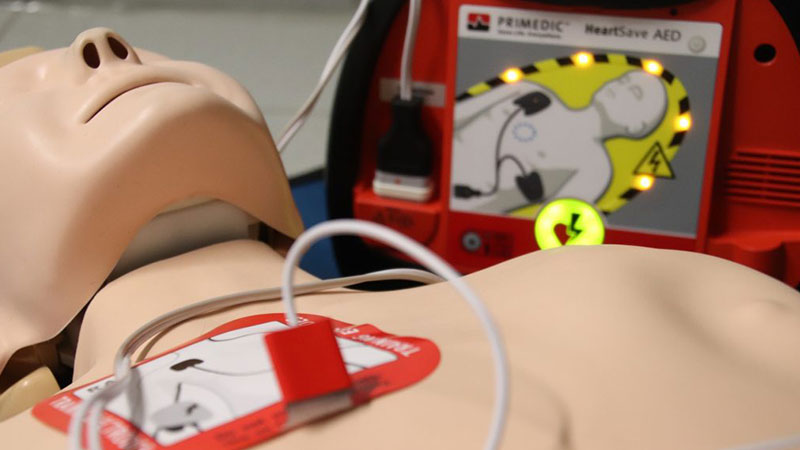 Hilo Medical Center Foundation kicked off the ambitious “Be-A- LifeSaver” campaign in March of 2015, a project aimed at saving lives when sudden cardiac arrest strikes. The goal of this program is to educate the public and empower them to react in a cardiac emergency situation by performing bystander chest-compression only CPR and early defibrillation to increase the chance of survival with better neurological outcomes in out-of-hospital ventricular fibrillation cardiac arrests.

“An offshoot of an Arizona program, “Be a Lifesaver Hawaii” will reach out to Hawaii Island residents to explain the importance of learning chest compression-only CPR, as well as work to identify public areas that could benefit from having access to automated external defibrillators (AEDs), which can shock a person’s heart back into rhythm after it has stopped. Once those areas have been identified, the campaign will work to find funding and buy the machines.

Unlike a heart attack, in which blood supply can be cut off to parts of the heart muscle, sudden cardiac arrest involves a complete stoppage of the heart’s pumping. Once that happens, you have only a few minutes to get it going again, said HMC Foundation Executive Director Lisa Rantz.

“By doing chest compressions only, you can move the oxygen in someone’s lungs to the brain, keeping the brain oxygenated, and it can increase your chances of survival from the single digits to the double digits,” said HMC Foundation Executive Director Lisa Rantz. “But when your heart stops, you’ve got to get it started again. And that’s where the AEDs come in.”

AEDs use computers to monitor a patient’s heart rhythm and then apply electric shocks to restart it if needed, she said.

“It does the thinking for you. It will even talk to you, tell you to back away when it’s shocking. It walks you through the process,” she said. The equipment is expensive, however, with most models costing between $1,500 and $2,000, according to the American Heart Association. Meanwhile, even if a particular business, organization or agency has one on hand, many people don’t know where the AED is located or what it is for, Rantz said.

The Foundation has secured $85,000 in start-up money from the Kaimas Foundation and the Steven M. Gootter Foundation, and has partnered with the Hawaii County Fire Department, the Hawaii Island Chamber of Commerce, KTA Super Stores and Hilo Medical Center…”

Cardiac arrest remains the number one global cause of death with 17.3 million deaths each year. According to the American Heart Association, this number is expected to rise to 23.6 million by 2030. Of those cases treated by emergency medical services, 10.6% survived. Of the identified 19,300 bystander-witnessed cases in which individuals had a heart rhythm that could be treated effectively with a defibrillator 31.4% survived. On Hawaii Island the survival rate has increased from 4% in 2014 to nearly 9% in 2016. The increase in survival rate is related to collaboration and communication between out-of-hospital EMS teams and the emergency room personnel for incoming cardiac arrest patients. The missing component on Hawaii Island has been the lack of public training and awareness of how to respond to cardiac arrests outside of the hospital setting.

The Be a Lifesaver Hawaii program is designed to raise awareness surrounding sudden cardiac arrest, stress the importance of learning and performing bystander chest-compression-only CPR, and provide public access to AEDs by placing automated external defibrillators (AEDs) in high-risk public locations across the island of Hawaii. By training the public to become bystander responders we can raise out-of-hospital survival rates to be in-line with those on the mainland where other similar programs have been launched such as Tucson, Arizona, Seattle, Washington and Rochester, MN where survival rates are well above the national averages (30-45% respectively).

The program has two goals. The first part of the program involves raising awareness through community partners with the creation of Public Service Announcements (PSAs) which run on Time Warner Cable, Na Leo TV, a local public access station, as well as several local radio stations. The Hawai’i County Fire Department along with primary care resident doctors from the Hawai’i Island Family Medicine Residency program, trained health-pathways college students and dedicated volunteers, many of whom are retired healthcare workers (i.e., doctors, nurses), will conduct bystander chest-compression-only CPR trainings for organizations within the community. Mass public bystander chest-compression-only CPR trainings are scheduled in connection/collaboration with large public events in an effort to train more individuals on island.

The second goal of the program is to identify where AEDs are currently located within the community, create a comprehensive list of locations and ensure the AEDs are in working order. The Be a Lifesaver Hawaii program donates AED devices to non-profit organizations to be placed in critical locations within the community. A critical component of the AED placement is the requirement that each recipient organization participate in a bystander chest- compression- only CPR and AED device training for employees and / or community members. These trainings are designed to take away the fear and uncertainty of performing bystander chest-compression- only CPR and using AED devices. Participants walk away from these training feeling empowered and knowledgeable in performing early CPR and using and AED if the need arises.

The marketing and awareness portions of the Be a Lifesaver program are anticipated to begin in January 2017. This will coincide with the launch of the PulsePoint software application, identification of existing AEDs within the community and placement of automated external defibrillators (AEDs) in critical need areas/locations. As part of the PulsePoint launch, a public island wide treasure hunt will take place where the public will be encouraged to go out and locate AEDs within the community, photograph them using their smart phones on the PulsePoint application; which will map out AEDs on Hawaii Island. Each mapped AED will need to be checked and verified to be in working order before being marked as active within the system.